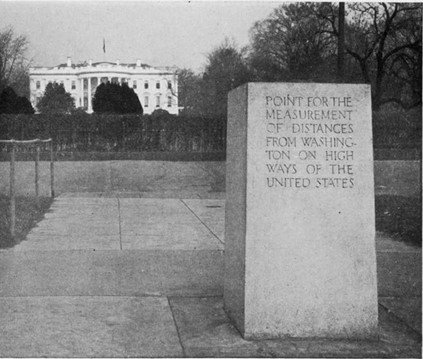 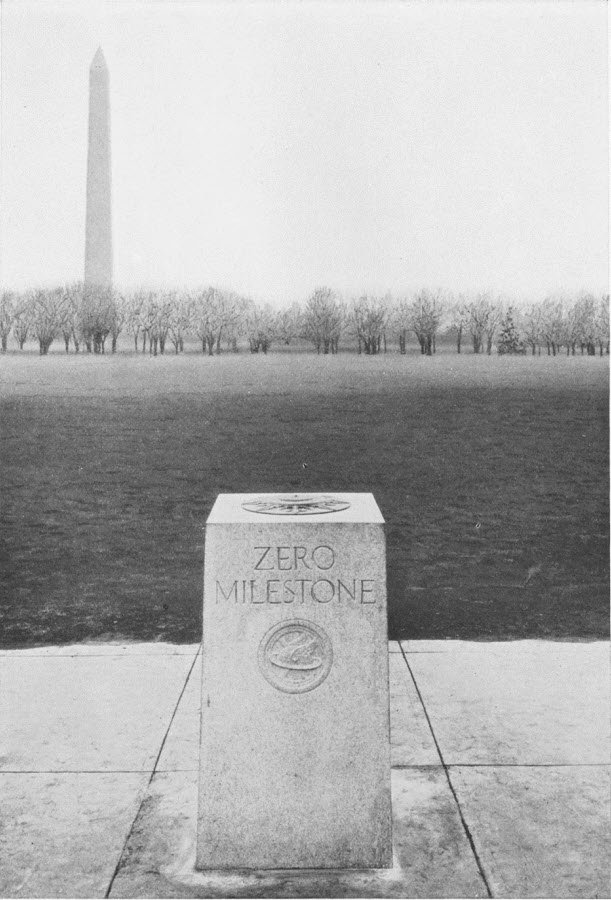 The suggestion of a Zero Milestone was made in a letter from Dr. S. M. Johnson to Col. J. M. Ritchie, of the Motor Transport Corps, dated June 7, 1919, as follows:

“It seems to me the time has come when the Government should designate a point at which the road system of the United States takes its beginning, and that the spot should be marked by an initial milestone from which all road distances in the United States and throughout the Western hemisphere should be reckoned.

Rome marked the beginning of her system of highways which bound her widely scattered people together by a golden milestone in the Forum. The system of highways radiating from Washington to all the boundaries of the national domain and all parts of the Western hemisphere will do vastly more for national unity and for human unity than even the roads of the Roman Empire. It would seem that a system of highways that embraces a hemisphere, and that is directly related to the welfare and progress of humanity should have a definite point of beginning, and that that point should be marked by a suitable milestone.

This stone will endure as the generations and the centuries come and go, till time shall be no more. If that golden milestone in Rome still has power to fire the imagination of men, how much greater will be the appeal of the Washington milestone as time goes on and American history grows ever richer in deeds of service to humanity."

In addition, the letter referred to carried the suggestion that the monument be of granite, that it mark the starting point of the Motor Convoy to the Pacific Coast, and that it be dedicated by the President of the United States.

Dr. Johnson’s suggestion was made without knowledge of a fact which has since been discovered, and which seems to have been absolutely forgotten. The following note appears on the original L’Enfant plan of Washington:

‘‘B-—an historic column—also intended for a mile or itinerary column, distance from whose station (a mile from Federal House), all of places through the continent are to be calculated.” The site proposed by L ’Enfant was on East Capitol Street. The selection of the site for the Zero Milestone west of the Capitol calls attention to the logic of events which led to the westward rather than the eastward growth of the Capital. The selection was made by Dr. Johnson after conference with Col. C. S. Ridley, Officer in Charge of Public Buildings and Grounds, and with H. W. Peaslee Washington, D. C.

For the Dedication of the Zero Milestone Monument
4th, 1923, at two o’clock in the afternoon
In the President’s Park (White Lot)
Washington, D. C.

Introduction of the Presiding Officer, the Hon. John W. Weeks, Secretary of War, by Lt. Col. Clarence 0. Sherrill, Military Aide to the President, Master of Ceremonies 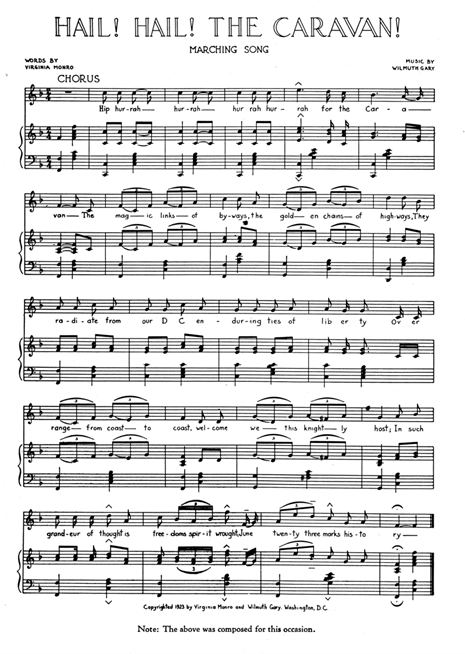 The idea of the first Transcontinental Motor Convoy to the Pacific Coast originated in two independent sources, having been suggested to the Motor Transport Corps in a letter dated March 12, 1919, by Captain Bernard S. McMahan, who was the Train Commander of the Expedition, and Caravan Director of the Shriner Caravan from San Francisco to Washington. Dr. S.M. Johnson also made a similar suggestion in a letter to the Secretary of Agriculture, dated May 15, 1919.

Through funds contributed by F. W. Hockaday, of Wichita, Kansas, a temporary marker was placed, and impressive ceremonies marked the departure of the historic convoy. The convoy included 10 automobiles, 9 motorcycles and 54 motor trucks, a total of 75 vehicles At Gettysburg, Pennsylvania, Lincoln Highway was reached, and followed to San Francisco.

The expedition proved that the Army could be moved across the United States by motor transport, but that, speaking generally, existing roads and bridges were too weak; that in many sections the road was too narrow; that the Army could not be moved by motor vehicles over dirt roads after excessive rain; that the heavy sands of the desert sections would likewise arrest its progress, and that economic development, as well as the national security, required the construction of a comprehensive system of national highways.

On June 5, 1920, Congress authorized the Secretary of War to erect a Zero Milestone, the design to be approved by the Fine Arts Commission. The Government was to be at no expense, since the monument was to be a gift to the Nation.

On June 14, 1920, the second convoy started from Washington to Los Angeles, over the Bankhead Highway; Major (now Lieut. Col.) John F. Franklin, Commander; composed of Motor Transport Corps No. 7, Service Park No. 330, Headquarters Motor Command No. 27, a total of 12 officers and 156 enlisted men. The train consisted of 11 automobiles, 37 trucks, 6 motorcycles, 3 trailers and two tractors. It arrived in Los Angeles October 6, 1920.

Upon request of the Secretary of War, Dr. S. M. Johnson, General Director of Lee Highway Association, took charge of the preparation of the design, the raising of funds, the erection of the Monument, and the ceremony of unveiling and dedication. The monument was designed and supervised by Horace W. Peaslee, Architect.

The work was given special consideration by the designer; by the Fine Arts Commission, Mr. Charles Moore, Chairman; by Mr. James E. Frazer, sculptor, member of the Commission; by Mr. Harry Ludeke, who modeled the disc; by the Gorham Manufacturing Company, of New York, which cast the bronze, and by the Lloyd Brothers Company, of Washington, D. C., which is responsible for the stone and its carving. The material is Balfour Pink Granite from the quarries near Salisbury, North Carolina.

The location of the stone is on the Meridian of the District of Columbia as marked by the “Jefferson Stone” placed south of the Ellipse in 1804. The “points of control” latitude, longitude and elevation above mean sea level were established in 1914 by the United States Coast and Geodetic Survey.

The gavel used in the dedication was made of sycamore from a timber taken from a Cliff Dwelling near Globe, Arizona, constructed in the Pre-Columbian Period, and cut with a stone axe. 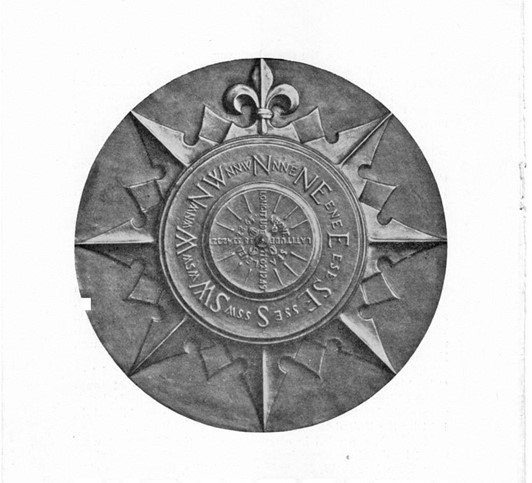 The bronze disc, on the top of the Monument, is an adaptation from ancient Portolan charts of the so-called “wind roses” or “compass roses” from the points of which extended radial lines to all parts of the then known world the prototype of the modern mariner’s compass.

The Monument is a benchmark and standard of linear measurement of the U. S. Coast and Geodetic Survey. The exact center is the starting point for the measurement of distances on Lee Highway, the Bankhead Highway and all other highways radiating from Washington. Lee Highway is erecting the “Pacific Milestone, ” an exact duplicate, with suitable inscriptions, at San Diego, California, distance 3,000 miles.

It is fitting that the Monument should be dedicated in connection with the Shriner Convention in Washington, upon arrival of the Transcontinental Shrine Motor Caravan, and with the greatest assemblage of automobiles in history.